Preview: The Short And Long Of It…

To date the Everest has been run five times and of the four winners of the race, two are no longer racing, having either been retired (Redzel) or are at stud (Yes Yes Yes), the remaining two winners Classique Legend and Nature Strip have both accepted to contest Saturday’s race, while second through fifth from last year’s Everest look also set to take their place.

Add into the mix the Bjorn Baker’s exciting Group 2 winner Overpass, a winner of his two trials this time in as well as Group 1 Galaxy winner Shelby Sixtysix, and we have a mouth-watering clash that will more than likely see the winner of this year’s Everest in the race. 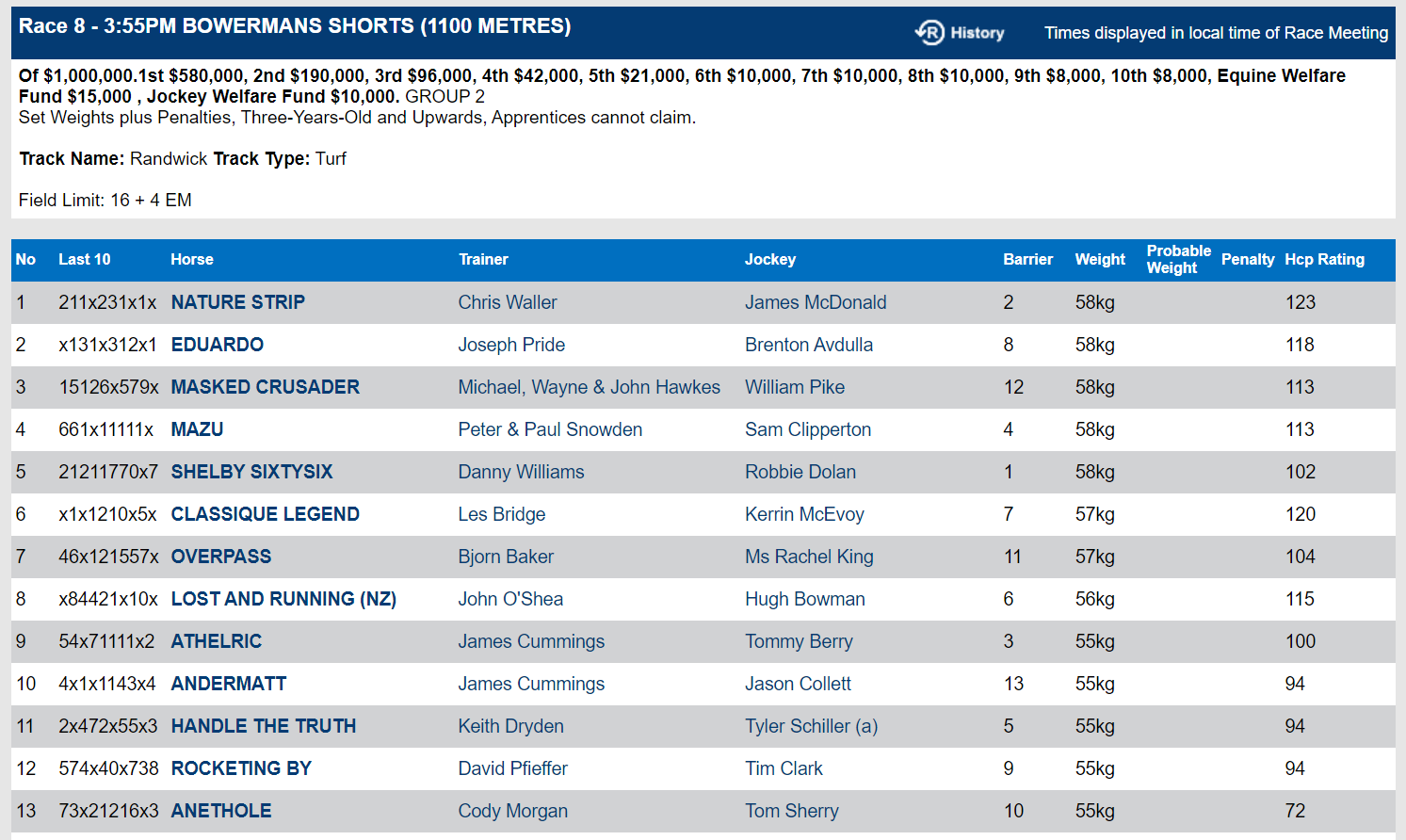 While it’s hard to go past Chris Waller’s Horse of the Year and nine-time Group 1 winner Nature Strip, who will race in the slot of his trainer, it is worth noting that he was beaten into second in this race last year behind Eduardo as the race favourite.

From barrier two, Nature Strip will likely go forward with James McDonald in the saddle, and although he has only had one trial leading into hirst first up run, he has shown with his fantatsic first up record that he will be forward enough for the run.

Jumping out last Saturday between races at Rosehill Gardens, Nature Strip looked in outstanding condition and has the credentials to further cement his Everest favouritism post Saturday’s race.

A winner of the Group 2 Shorts two years ago, Les Bridge’s Classique Legend has certainly had an interesting time since that win.

Winning the Everest two starts after his Shorts victory, the Legends Racing owned gelding transferred to the Hong Kong stable of Caspar Fownes where he had his first start in the Hong Kong International Sprint, failing to impress and finished in eleventh position.

Unfortunately suffering a bleed and banned from racing for 3 months as he was being readied for the Group 1 Sprint Prize at the end of April 2021, Classique Legend was sent back to Australia where he’s subsequently had only one start, finishing a gallant fifth in last year’s Everest behind Nature Strip.

Bridge has always been adamant that if he turns up ready for this year’s Everest, that the only horse capable of beating his grey gelding is Nature Strip, so one would expect Classique Legend to prove hard to beat come Saturday.

Winning first-up in the Group 3 Concorde Stakes, scoring by more than two and a half lengths over Athelric and Handle The Truth, both of which have accepted for Saturday, the Joe Pride trained 9yo Eduardo (below) was a simply a class above. 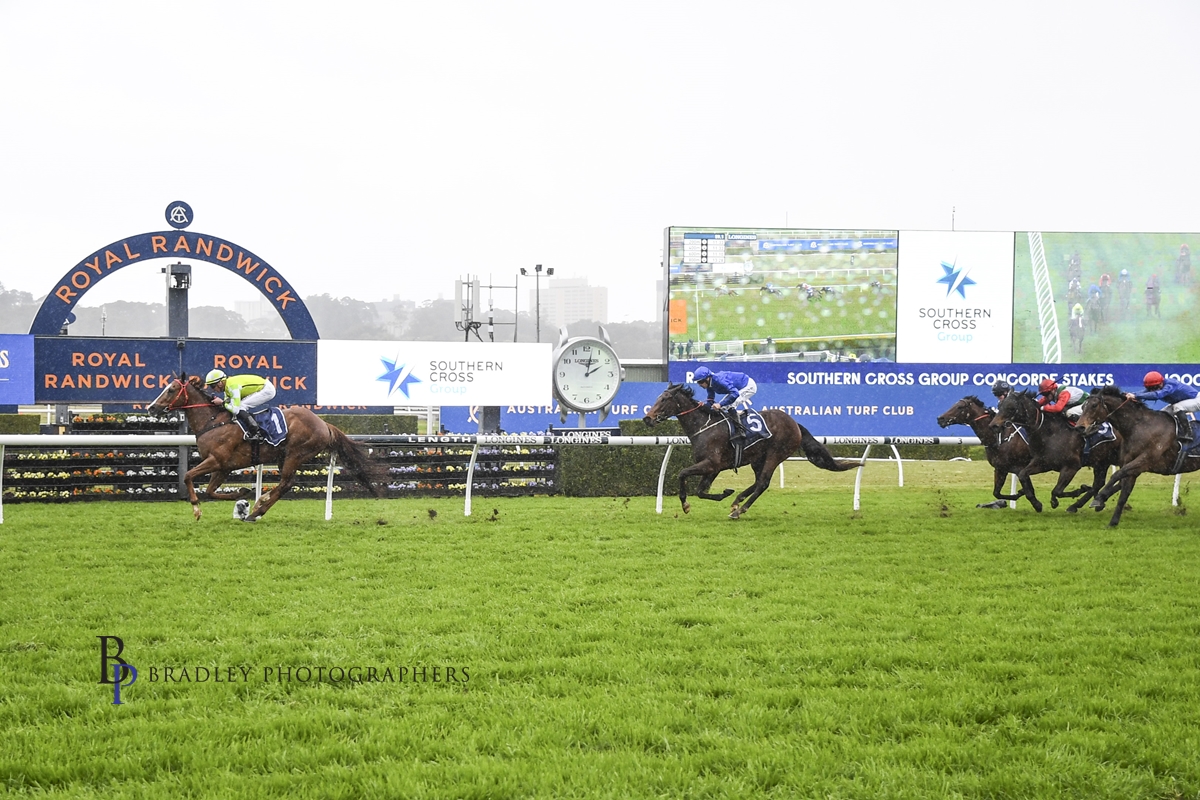 Second in the 2020 Shorts before winning the 2021 edition, the Yulong Investment allocated slot holder Eduardo has race fitness on his side and come Saturday he will have the services of Brenton Avdulla with regular jockey Nash Rawiller on the side lines due to a suspension.

Arguably the most interesting runner, who is on his first quest to conquer Everest is the Peter and Paul Snowden trained Mazu.

The son of Maurice has won his past six starts, ending his most recent campaign with success in the Gr1 Doomben 10,000, a race won by former Everest winner Redzel. The similarities don’t stop there, with the gelding not only also trained by the father and son duo but was purchased and raced by Michael and Chris Ward’s Triple Crown Syndications.

With two barrier trials in readiness for his campaign debut, the Sam Clipperton ridden gelding has drawn ideally in barrier four, which will see him go forward and settle not to far off the leaders.

Mazu (below) is set to race in the slot of Arrowfield Stud, the southern hemisphere base of his sire, as well as The Star Sydney with the duo teaming up with the Snowden trained runner for the 2022 and 2023 Everest, clearly highlighting their faith in the Inglis Classic yearling sale graduate. 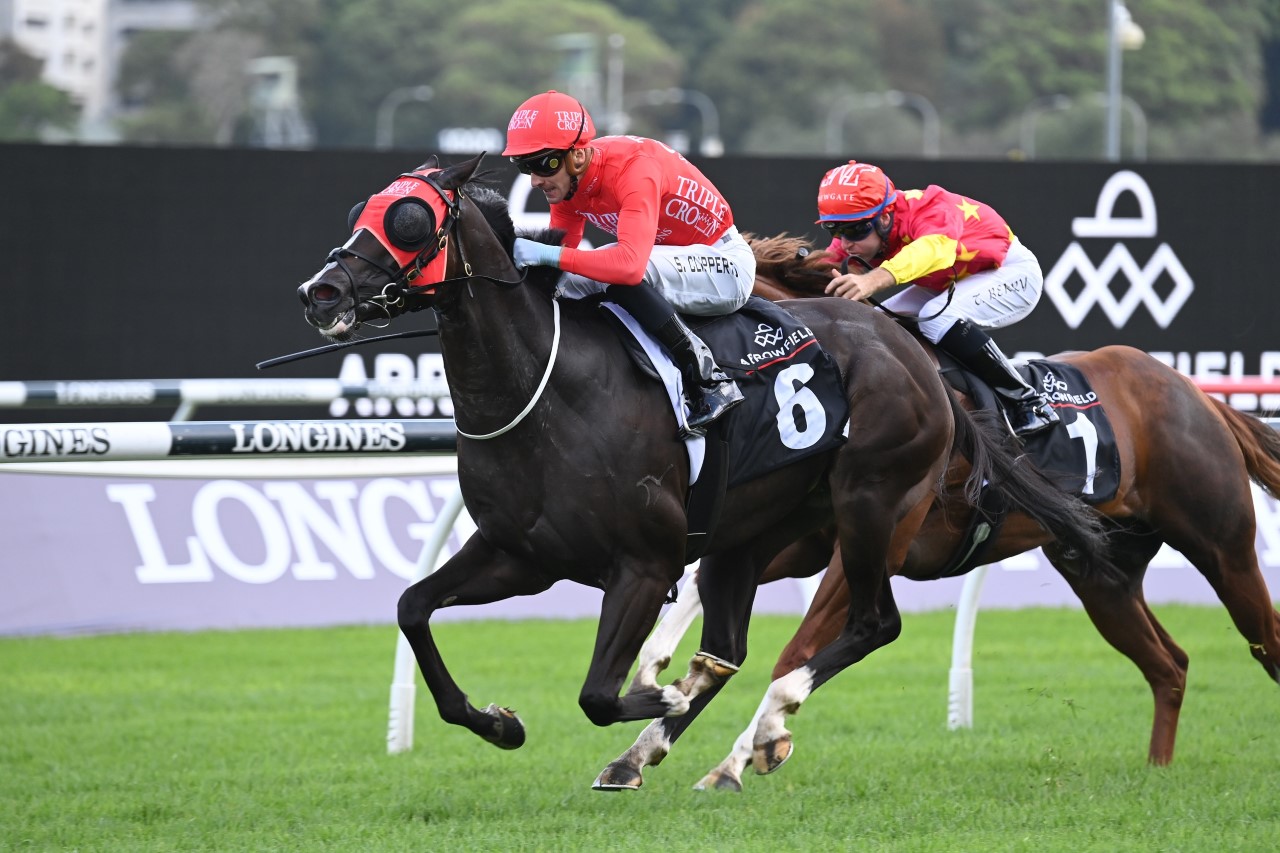 Set to jump from barrier 11 and 12 respectively, the up and comer Overpass and the proven Group 1 winner Masked Crusader both look to have a show first up, with Bjorn Baker’s 4yo stallion prospect likely to try and go forward while the Hawkes Racing trained son of Toronado is likely to go back to last.

A winner of the Group 2 Expressway Stakes first up last campaign defeated Forbidden Love and Anamoe, Overpass went on to finish second at his next run behind Lost And Running.

Fifth in both the Group 1 Galaxy behind Shelby Sixtysix and Group 1 TJ Smith Stakes behind Nature Strip during the Autumn, the Darby Racing syndicated Overpass is yet to secure a slot, but with seven slot holders still yet to select a runner, a forward showing here by the son of Golden Slipper winner Vancouver could highlight himself.

Racing in the slot of Max Whitby and Neil Werrett in this year’s Everest, like he did last year, the Gilgai farm bred and sold Masked Crusader missed the start last year and charged home with phenomenal speed to go down narrowly to Nature Strip.

Given two easy trials, jockey William Pike will need to work his magic from the outside barrier, but if the speed up front is frantic, it would be no surprise to see Masked Crusader produce a ‘Chautauqua’ like effort and come up from the clouds.

With three wins from four first up performances, the John O’Shea and Hugh Bowman combination will team up with Lost And Running, one of the final leading contenders come Saturday.

Beaten just over two lengths in last year’s Everest, the 6yo gelding has had four runs since that day, finishing second to Eduardo in the $1m Classique Legend Stakes before winning two including a victory over Overpass in the Gr3 Southern Cross Stakes.

Likely to be there when the whips are cracking, the TAB secured slot runner looks to be just a length or so off the better chances, but there is no reason things can’t fall into place.

No matter what the result is on Saturday, the race will be a key indicator for the upcoming $15m Everest on October 15, and the form to come out of this race should be studied closely.